by University of Washington
in Social Psychology 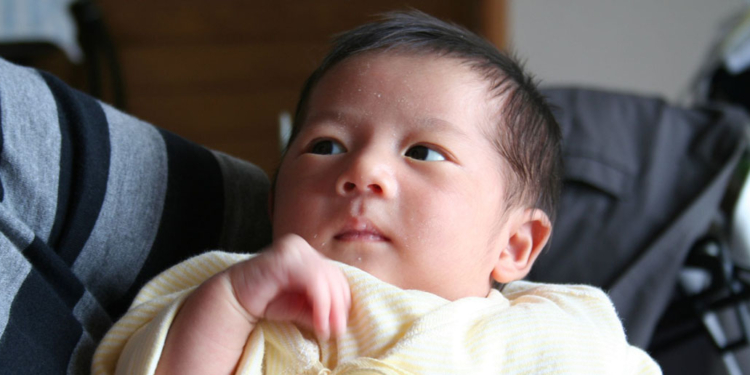 Adults often form fast opinions about each other’s personalities, especially when it comes to negative traits. If we see someone argue with another driver over a parking space, for instance, we may assume that person tends to be confrontational.

Two new research studies with hundreds of 15-month-old infants demonstrate that babies form similar generalizations about others and make attempts to appease adults they consider prone to anger.

The research, by scientists at the University of Washington’s Institute for Learning & Brain Sciences (I-LABS), reveal for the first time that 15-month-old babies generalize an adult’s angry behavior even if the social context has changed.

“Our research suggests that babies will do whatever they can to avoid being the target of anger,” said lead author Betty Repacholi, an I-LABS faculty scientist. “At this young of an age, they have already worked out a way to stay safe. It’s a smart, adaptive response.”

In one of the studies, published in the March issue of Developmental Psychology, Repacholi and co-authors wanted to see how exposing babies to an unfamiliar adult’s anger toward another adult would affect the babies’ behavior in a new situation. Do the babies assume that the initial negative encounters would happen again?

“Our research shows that babies are carefully paying attention to the emotional reactions of adults,” said co-author Andrew Meltzoff, co-director of I-LABS.

“Babies make snap judgments as to whether an adult is anger-prone. They pigeon-hole adults more quickly than we thought,” added Meltzoff, who holds the Job and Gertrud Tamaki Endowed Chair at UW.

The experiment went like this: The babies, 270 15-months-old that included a mix of boys and girls, sat on their parents’ laps across the table from a researcher called the “Experimenter.”

The baby saw the Experimenter demonstrating how to play with a series of toys. In each trial, a second researcher, the “Emoter,” reacted in either a neutral way (“That’s entertaining.”) or negative way by saying “That’s aggravating!” in a stern voice when the Experimenter performed her action on the toy. The Emoter’s reaction was the same for each toy.

Then the baby had a chance to play with the same toy.

The researchers measured how readily the babies imitated the Experimenter’s actions. Babies who witnessed the angry outburst were less likely to play with the toy or to duplicate the adult’s actions than babies who saw a neutral reaction from the Emoter.

Watch a video from an earlier study demonstrating the experiment:

Next, the Experimenter showed the baby how to play with a new toy. This time, however, the previously angry Emoter now appeared to be neutral.

“We wanted to see if babies would treat the anger they had seen before as a one-off event or whether they see it as being part of the person’s character,” Repacholi said.

When given the chance to play with the new toy, the babies who knew the Emoter’s angry history avoided playing with the toy, compared with the babies who were in the neutral group.

“It’s as if the baby doesn’t trust that the Emoter is now calm,” Repacholi said. “Once babies have detected that someone’s prone to anger, it’s hard to dismiss. They’re taking a better-safe-than-sorry approach, where they’re not going to take a risk even though the situation has apparently changed.”

A second new study by Repacholi, Meltzoff and team suggests that babies are capable of coming up with appeasement gestures in situations involving anger-prone adults. The findings are published online and will appear in an upcoming issue of the journal Infancy.

Using a similar experimental setup, another group of babies — 72 15-month-olds, with an even number of boys and girls — first observed either the “angry” or “neutral” Emoter’s reaction to toys used by the Experimenter.

Then, the twist: the Experimenter brought out new toys designed to be highly desirable to the infants, such as a toy with a small ball that lit up when rotated.

Sitting on their parents’ laps, the babies got to play with the appealing toy briefly before the Emoter — who had a neutral facial expression and wasn’t showing any anger at this point — asked for a turn.

“I was so surprised to see the infants give the toys away — it was like they were appeasing or compromising with the adult,” Repacholi said. “They didn’t want to risk making the previously angry adult mad again. They didn’t act this way with the other adult who had not shown anger.”

Together the studies illustrate how babies:

– can have negative emotions dominate their perceptions of a person’s character, and

– tend to assume a person with a history of anger will become angry again even if the situation has changed.

“Our studies show that babies are very tuned into other people’s anger,” Repacholi said. “For parents, it’s important to be mindful of how powerful that emotion is for babies.”

Added Meltzoff, “The babies are ’emotion detectives.’ They watch and listen to our emotions, remember how we acted in the past, and use this to predict how we will act in the future. How long these first impressions last is an important question.”