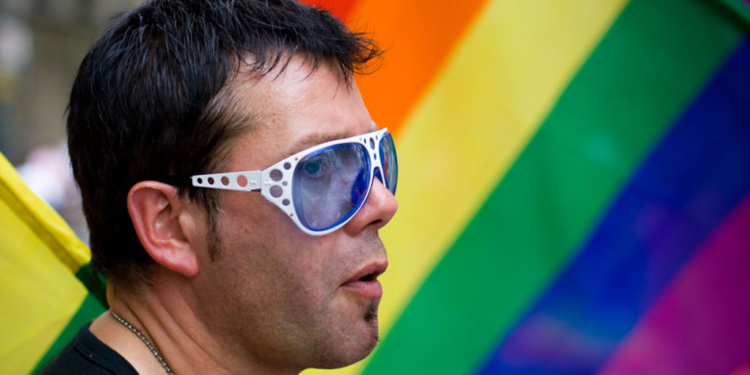 The research, appearing in the peer-reviewed journal Self and Identity, examines verbal disclosure of one’s gay identity to others as reported by the two groups of gay men.

“Verbal disclosure is what most people think of as ‘coming out’ as gay,” said lead author Adrian Villicana, a doctoral student in social psychology at the University of Kansas. “It’s verbalizing to other people, ‘I am gay.’ It’s a proclamation, it’s yelling from the rooftop — at least that’s a common understanding of what it is and should be.”

Indeed, Villicana and his co-authors Kevin Delucio of the University of California, Santa Barbara, and Monica Biernat of KU, suggest that verbal disclosure is emphasized by National Coming Out Day as a kind of “cultural directive.”

But the researchers sought to discover if positive benefits of verbal disclosure — shown to enhance subjective well-being– apply equally to white and Latino gay men.

“In the literature there are various models that detail the process by which gay men form their gay identity and integrate it into their sense of self,” Villicana said. “This ‘integration’ is when you finally start to accept your gay identity, internalize it into how you think of yourself and start to ‘come out’ to others about being gay. Generally, these models assume coming out is verbal disclosure, and it’s associated with the extent to which you’re comfortable being gay — the more you disclose and the more people know you’re gay, the more you’ve accepted and are comfortable with being gay.”

As a result, the investigators suggest verbal disclosure might accurately be seen as an effective strategy within a “white framework” that doesn’t account for facets of identity like race, ethnicity, socioeconomic status and religion.

“When scholars talk about gay identity as a white construction, it’s because the data we have comes from gay white men for the most part,” Villicana said. “While it’s good to understand this identity and related process, it limits our understanding of gay-related processes for other people. It’s confusing and potentially misleading to use data from one group and apply it to another group in the same way.”

New data revealed by the team’s research reveals this difference, he said.

“We found two reasons why gay white men who verbally disclose have higher well-being,” Villicana said. “First, verbal disclosure leads to more feelings of authenticity, so feeling that they are showing their ‘true self.’ Second, as they verbally disclose to others, they begin to incorporate others into how they view themselves. But for gay Latino men, verbal disclosure is not related to these two things. For gay Latino men, authenticity and incorporating others into how they view themselves is not influenced by their sexual identity, but may be more tied to their ethnic identity.”

The researchers suggest that gay men of color could gain the same benefits to their well-being through implied disclosure rather than verbal disclosure of their gay identity.

“This paper looks at disclosure by other means,” Villicana said. “Disclosure can be nonverbal. It’s more action-based, like bringing a same-sex partner to family events. More stereotypically, you might bring your same-sex roommate of 20 years. So, there’s tacit acknowledgement, but there isn’t discussion or verbalization. You’re still sharing it with other people, but not in verbal ways.”