New research indicates that that wearing heavy makeup a can lead to a “subtle form of dehumanization.” The study, published in the journal Sex Roles, found that women were perceived as having less human-like traits when wearing makeup compared to when not wearing makeup.

“A growing body of research has shown that body sexualization prompts dehumanization and objectification. That is, that bodies wearing lingerie and displaying suggestive postures are visually processed akin to objects at a basic cognitive level and perceived as being less human,” explained study author Philippe Bernard, a tenured researcher at the Free University of Brussels.

“That line of research has been informative regarding how people perceive sexualized images appearing in the media, but little is known regarding whether subtler forms of sexualization, such as makeup, might influence the way people form impressions of female models and ‘ordinary’ women.”

In four experiments with nearly 1,000 participants in total, the researchers examined how the presence of heavy makeup was related to the dehumanization of women. Participants viewed portraits of women’s faces, which either included makeup or did not, and were asked to complete a questionnaire assessing their perceptions of them. 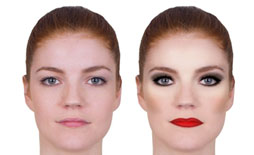 An example of the images used in the study.

The researchers found that women with heavy makeup were rated by both male and female participants as having less humanness, agency, experience, competence, warmth, and morality compared to women without makeup. Faces with makeup were also rated as more sexualized than faces without makeup.

“Faces are perceived as being more sexualized when wearing makeup, which indicates that sexualization can be communicated through facial cues (e.g., lipstick and mascara) and not only through bodily cues (e.g., through tight-fitting clothing, suggestive postures),” Bernard told PsyPost.

“Our research also shows that heavy makeup triggers lower attributions of human-like traits to women, regardless of whether they were models or ordinary women. This suggests that heavy makeup prompts men and women to focus more on women’s sexiness and sex appeal than on their personality, thereby causing a subtle form of dehumanization.”

The researchers used augmented reality technology known as ModiFace to add makeup to images of the women’s faces. “The positive side of such technology is that we ensured that makeup characteristics were the same for all faces. We have thus tested our hypothesis that makeup influences attribution of human-like traits with well-controlled images of faces and with extreme variations of makeup (no makeup versus heavy makeup),” Bernard explained.

“Future researchers might want to replicate our findings in a more nuanced way, e.g., by gradually manipulating the makeup intensity to identify whether the dehumanizing effect of makeup occurs at lower levels of makeup intensity.”

“Future research might also being interested in examining the underlying social and cognitive mechanisms explaining why people attribute less human-like traits to women wearing heavy makeup. In the light of recent research, it might be that faces with heavy makeup are perceived as possessing less human-like traits because they are visually processed in a way that resembles how most objects are processed (see also https://www.nature.com/articles/s41598-019-42928-x),” Bernard said.