When women do more household labor, they see their partner as a dependent and sexual desire dwindles

by Laura Staloch
in Relationships and Sexual Health, Social Psychology 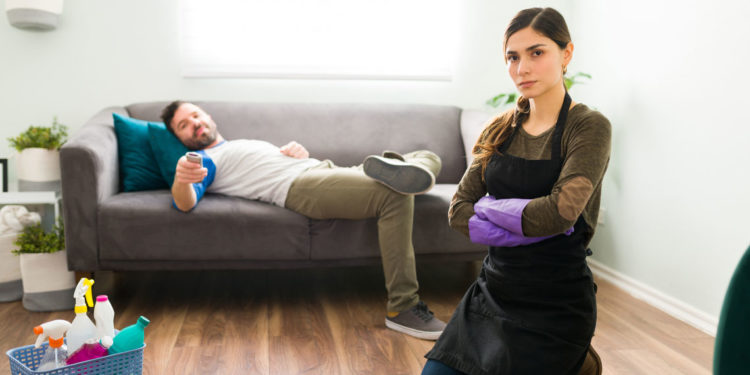 A new study published in the Archives of Sexual Behavior confirms what women in long-term relationships with men have been saying all along — when household labor is unequal, women’s sexual desire declines.

The study collected data from over 700 women partnered with men who also had children. The new findings indicate that the decline in sexual desire may be related to two factors: 1) the perception that the labor division is unfair and 2) perceiving their partner as dependent on them.

Often when women seek help for declining sexual desire, practitioners take a medical perspective of the problem. Prior research has found that biology is not always the cause of a woman’s struggle with sexual desire. Chronic stress and relational stress have both been found to be causes of a decrease in sexual desire.

Emily Harris and colleagues recognized that little research had been done on the origin of these causal factors. The research team put it this way: “However, there are open questions related to why women may be experiencing stress, tiredness, cognitive distractions, and subsequent low desire.”

Participants were found using Prolific Academic, a survey platform. Seven hundred and six women fit the following criteria: cohabiting with someone who identifies as a man for six months or longer and living with a dependent 12 years of age or younger. In addition, participants completed the Hurlbert Index of Sexual Desire, a measure of household chores that consisted of a list of 109 household tasks that they were to identify if the task was done in their home, who typically does the task (themselves or their male partner). They also took assessments to identify how unfair they perceive the division of labor to be and to what degree they see their partner as a dependent.

Analyzing this data, Harris and colleagues discovered their initial hypothesis was correct. When household chores are not shared equally, there is a significant decrease in sexual desire. However, their second hypothesis suggested that sexual desire declines due to the perceived unfairness of the division of labor; the data only weakly support this. Finally, there was a significant correlation between lack of desire, household chore responsibilities, and perceived dependence of the male partner.

When reflecting on these results the research team concluded, “women who reported that they performed a large proportion of household labor relative to their partner were significantly more likely to perceive their partners as dependent on them to keep the household functioning, and this in turn was associated with significantly lower desire for their partner. These findings support the heteronormativity theory, which states that inequities in household labor can lead to a blurring of mother and partner roles, and that feeling like a partner’s mother is not conducive to desire.”

Some limitations to the study were identified. First participants were almost entirely white and resided in the United States and Western Europe; these demographics limit the application of these findings. Other cultures may experience the interplay of these variables differently. Second, stress from outside the home may have consequences for sexual desire and perceptions of the partner.

Despite these limitations, the researchers conclude that their work is valuable to those practitioners working with women seeking help for decreasing sexual desire.