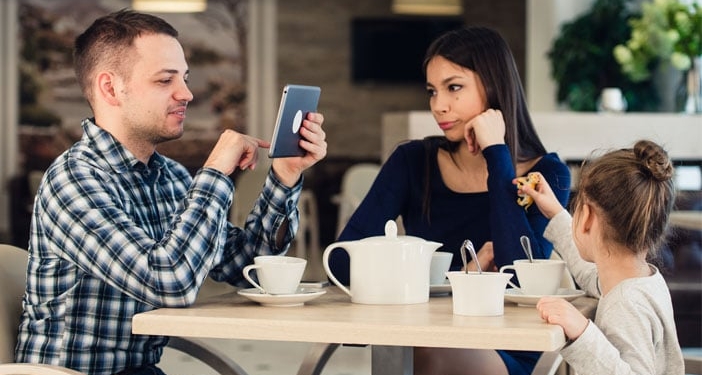 New research suggests that people who are more prone to boredom are also a bit more likely to engaging in phone snubbing — also known as phubbing. The new study, which appears in the Journal of Technology in Behavioral Science, examined why some people ignore someone they’re socializing with to concentrate on their mobile phone.

“About five years ago, every time I entered a coffee shop I would see young people sitting with each other but not talking to each other. I would see them mostly busy with smartphones,” said study author Yeslam Al-Saggaf, an associate professor at Charles Sturt University.

“So, I became curious as to why would they go into the trouble of organising get togethers when they are not going to talk to each other. Is it possible that their face-to-face conversations are no longer as stimulating as their online interactions? Is it possible they still want to enjoy the warmth of the company of each other (i.e. rubbing shoulders) but not the face-to-face conversation?”

“If yes, this may mean that online interactions are more exciting. I have not looked at this yet and hope to do this in future — but that is why I wanted to see if boredom predicts phubbing behaviour,” Al-Saggaf said.

The researchers used SurveyMonkey to administer questionnaires to 352 adult smartphone users. The questionnaires assessed the participants’ proneness to boredom and how frequently they looked at their smartphone while having a conversation.

Al-Saggaf and his colleagues found no gender difference in phubbing frequency, and there was no difference between rural and urban populations. But younger participants did tend to phub significantly often more than older participants.

The researchers found that proneness to boredom was positively related to phubbing. In other words, people who agreed with statements such as “I find it hard to entertain myself” and “It takes more stimulation to get me going than most people” tended to also report phubbing more frequently.

“Phubbing impacts social relationships negatively. The average person may not be aware that phubbing others has negative consequences. They may engage in phubbing others without noticing. I they should reflect on their use of their smartphones in social situations and also have a conversation around this topic to see how their conversation partners perceive the experience of being phubbed,” Al-Saggaf told PsyPost.

The findings suggest that boredom plays a role in phubbing. But boredom does not appear to be the main reason people phub.

“Young people may not see a problem with phubbing. The nature of their conversation is frequently interrupted, fragmented, multimodal (i.e. they constantly switch between online and face-to-face) — just like how they text,” Al-Saggaf said.

“Phubbing may be an acceptable behaviour or a tolerated habit. It could be already an integral part of their face-to-face conversation or it could be the latest thing in human communication, so we may just have to move on — just like we did with every other new technology that shaped our lives.”

Previous research has found that phubbing can significantly and negatively affected the way the person being phubbed feels about their interaction with the other person.

The study, “Trait Boredom Is a Predictor of Phubbing Frequency“, was authored by Yeslam Al-Saggaf, Rachel MacCulloch, and Karl Wiener.