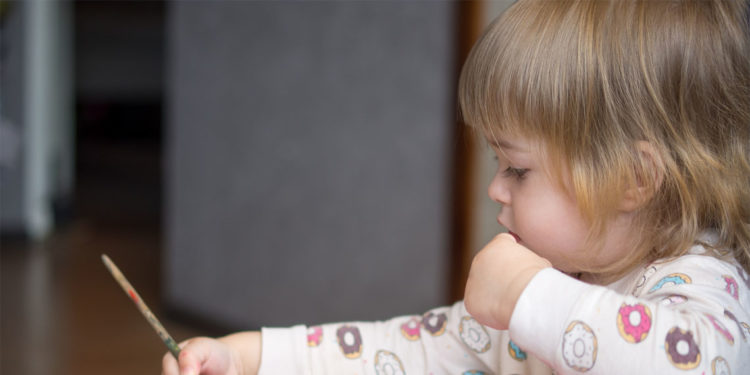 Young children tend to have poorer cognitive skills when they have a diet high in processed foods and live in a chaotic household environment, according to new research published in the journal Nutrients. The study examined executive functioning in children aged 18–24 months.

“I was interested in studying executive function in young children because of its rapid development in early childhood and its influence on several factors within a child’s life (e.g., their ability to regulate behaviors and emotions, pay attention, and use their working memory),” explained study author Samantha Iwinski, a doctoral student at the University of Illinois Urbana-Champaign.

“Dietary intake and household environment factors can influence children’s executive function; however, there is not an abundance of research surrounding children aged 18 to 24 months. During this period, the caregivers may have a large window of plasticity to influence their child’s executive function development. We wanted to explore if household chaos could impact the relationship between dietary consumption and executive function.”

The study examined data from 294 families participating in the STRONG Kids2 birth cohort study, in which researchers began collecting data on the children’s dietary habits, weight trajectories, family relationships, and other factors when they were about 6 weeks old. Parents completed a questionnaire regarding their child, which assessed domains of executive functioning such as inhibition, attention/task shifting, emotional control, working memory, and planning/organizing.

Child dietary intake was assessed using the Food Frequency Questionnaire. Caregivers also completed a measure of household chaos known as the Confusion, Hubbub, and Order Scale, which assessed whether the child’s home environment was typically quiet and run with regularity or was prone to noise, overcrowding and disorganization.

The researchers found that greater household chaos was associated with lower scores on all five domains of executive functioning. The study authors said that children “may not understand the signals around them when environments are noisy or disorganized, and the lack of routine and regularity might influence their attentional and emotional regulation.”

Additionally, higher intake of snacks and processed foods was associated with lower shift and emotional control abilities, as well as lower working memory and planning and organizing abilities in the children. In other words, children who consumed more snacks and processed foods exhibited diminished cognitive performance in several domains compared to children who consumed less of these foods.

“These findings support the notion that the nature of the household environment, specifically household chaos, may influence young children’s developing executive function capacities,” Iwinski told PsyPost. “Preventions focused on activities and support for parents to establish healthy routines and lower unhealthy food intake in their children might help mitigate executive function problems. The data suggest that children’s unhealthy dietary intake may also be related to the household environment. These factors might impact a child and family on multiple levels and have implications for children’s developing executive function capacities.”

To better understand how household chaos and diet influence executive functioning as children continue to develop, Iwinski and her co-authors are planning a follow-up study with the same families and their children, who are now 5-6 years old.

“Since children are rapidly developing during childhood, we need to understand these concepts over time and how this may affect families differently,” Iwinski explained. “There is not one way to have routines and a healthy diet, so it is essential to look at these associations across families and throughout their development. To try to answer the question above, we plan to do longitudinal analyses with our birth cohort.”

The study, like all research, includes some limitations. The families included in the study were predominantly White and financially stable, and it is unclear if the findings are generalizable to other populations. “Future researchers must include more diverse families and use various methods,” Iwinski said.

The study, “The Impact of Household Chaos and Dietary Intake on Executive Function in Young Children“, was authored by Samantha Iwinski , Sharon M. Donovan, Barbara Fiese, and Kelly Bost.