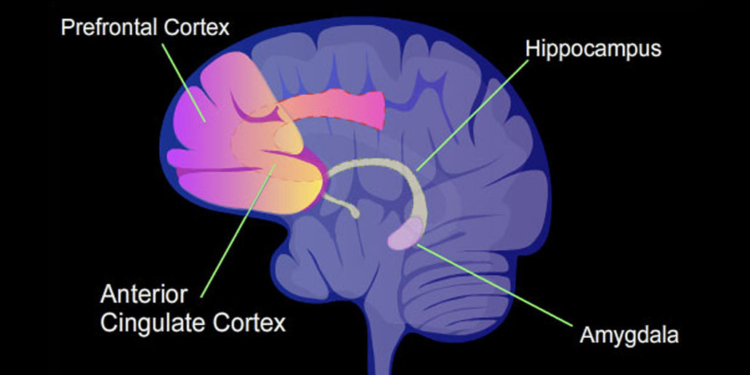 Major depressive disorder is associated with altered interoception — or the ability to sense the internal state of your body. Now, new brain imaging research provides evidence that depressed individuals tend to exhibit “faulty” neural processing of gastric interoception, particularly among those with high levels of rumination. The findings have been published in the Journal of Psychiatric Research.

“The reason is that when it is severe and persistent, RNT conditions higher chances of depression relapse and is associated with residual symptoms after treatment, is more common in persons who do not respond to treatment, and is even related to suicide. This particular communication refers to one among a series of projects in our lab attempting to understand rumination.”

“In a previous communication, we reported on the fact that high rumination is associated with poor emotional learning abilities,” Guinjoan said. “And one possible mechanism for this to happen was that interoceptive feedback (i.e., information from the body conveying emotion) was faulty in persons with depression.”

The study included 48 depressed individuals who scored high on the Ruminative Responses Scale and 49 depressed individuals who scored low on the scale. People who score high on the scale report that they frequently engage in various types of rumination, such as thinking about their shortcomings, thinking about how alone they feel, and thinking “Why do I always react this way?” The researchers also recruited 27 healthy volunteers, who served as a control group.

To assess the neural correlates of interoceptive awareness, the participants were instructed to selectively attend to the sensations originating from their heart and stomach while the researchers used functional magnetic resonance imaging technology to monitor their brain activity.

“We observed that persons with depression have a problem with the central processing of interoceptive information that originated specifically in the gut, in relation to having a greater tendency to ruminate,” Guinjoan told PsyPost. “We hypothesize that in this setting, the interoceptive information provides an insufficient, or faulty, feedback onto the perception and learning of emotions, and this might in turn impede that the highly ruminative person with depression stops his/her repetitive, negatively-laden thoughts.”

The researchers were surprised to find that abnormalities in the neural processing of interoception were limited to the stomach.

“We somehow expected interoceptive abnormalities were going to be more marked in the heart territory,” Guinjoan explained. “But it turned out that interoception from the stomach was more compromised. Looking back, this makes sense as so many people with depression actually present with symptoms referred to the abdomen, including patients who see a primary care doctor or a gastroenterologist because of their abdominal complaints. On the other hand, persons with anxiety seem to focus more on the cardiovascular system.”