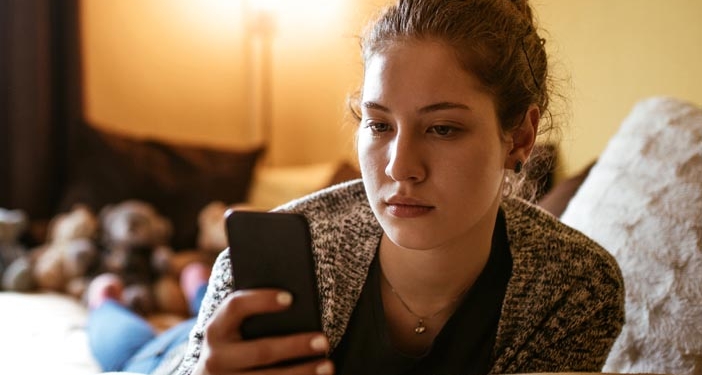 A new study in the Journal of Social and Personal Relationships suggests that lonely individuals may be at particular risk when it comes to the compulsive use of mobile dating applications like Tinder.

“I generally study relationship initiation, and I’m fascinated by how technology can assist people in finding relationships, particularly romantic relationships,” said Kathryn Coduto, the corresponding author of the study and doctoral student in communication at The Ohio State University.

“However, I also think that technology can be both good and bad, and that we need to think carefully about how we engage with all kinds of social media specifically. I had firsthand experience seeing people opening dating apps when out with friends, and I was curious about what might drive that behavior.”

In the study, 269 undergraduate students completed online assessments of loneliness, social anxiety, dating app use, and other factors. The researchers found that social anxiety was related to a preference to meet and talk to potential dating partners online rather than in person.

But this preference for online social interaction only predicted compulsive dating app use among those high in loneliness. In other words, people who agreed with statements like “I feel left out” and “I am constantly nervous around other people” also tended to agree with statements such as “I have made unsuccessful attempts to control my use of dating apps.”

The researchers also found that higher levels of compulsive dating app use was associated with greater negative outcomes, such as missing class or work because of dating apps.

“If someone is both socially anxious and lonely, it can lead to compulsive dating application use, which in turn can lead to harmful effects in one’s personal and work lives,” Coduto told PsyPost.

“Lonely, socially anxious people are the most likely to have a difficult time controlling their use of dating apps, as they are searching for connections that they haven’t been able to find in a face-to-face setting. But a lot of use does not necessarily mean more matches or better matches; it’s important to think about how someone is actually using the apps and how the apps are making them feel.”

The researchers controlled for factors such as age, sex, relationship status, sexual orientation, self-esteem, personality, and time spent on dating apps. But — like all research — the study include some limitations.

“One important thing to remember with this study is that we used a student sample, and so we’re definitely limited in the age range that we studied. This study is primarily focused on Millennials, and so we need more work to understand dating app use through a variety of ages and life stages,” Coduto explained.

“We also only looked at the predictors of compulsive dating app use: We need more work to see if dating apps then impact social anxiety. For example, more works need to be done to actually probe whether or not constant swiping then leads to worse social anxiety, or if just seeing possible connections can alleviate any of that anxiety. We just don’t know yet.”

“I would say that dating apps can be a great way to meet people if you are realistic about what they are: Just another tool for engaging. They are not a guarantee of a lifelong romance, much less a good one night stand. Managing your expectations and regulating your use are important for successful app use,” Coduto added.

The study, “Swiping for trouble: Problematic dating application use among psychosocially distraught individuals and the paths to negative outcomes“, was authored by Kathryn D. Coduto, Roselyn J. Lee-Won, and Young Min Baek.