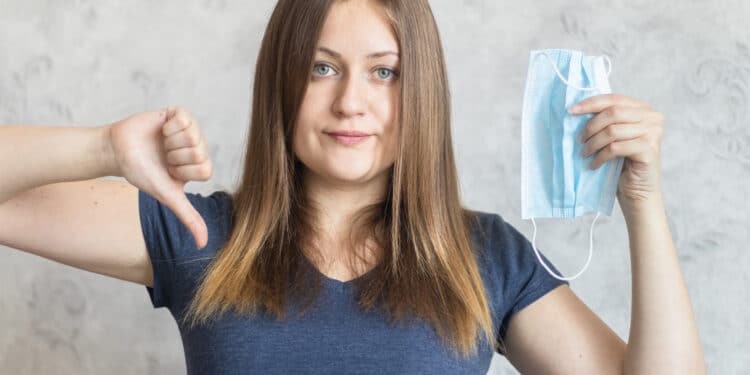 Politically conservative Americans are less likely than liberals to comply with recommended health-protective behaviors such as mask wearing during the COVID-19 pandemic, but this is not necessarily true of conservatives in other nations, according to new cross-cultural research published in PLOS One.

On March 11, 2020, the World Health Organization declared the outbreak of SARS‐CoV‐2 to be a global pandemic. Governments and health agencies around the world urged people to follow measures such as hand washing and social distancing to prevent the spread of the virus. The use of face coverings was later recommended, and many governments enacted mask mandates.

But not everyone abided by the guidelines, and an international team of scientists set out to explore the relationship between political orientation and the willingness to adopt health-protective behaviors related to COVID-19.

“We were conducting a large cross-national study of psychological reactions to elements of the COVID-19 pandemic,” said study author Michelle vanDellen, an associate professor of psychology at the University of Georgia. “We sent weekly surveys for three months and then monthly follow-up surveys. In each survey, we could include new questions as different issues became relevant (e.g., mask-wearing became more of a recommendation in May than in March.)”

“We started to realize how difficult it was to talk about these issues in different languages and cultural contexts because the political landscapes were just not the same in the United States as in other places. And because we had the data to test that research question, we did.”

Between March 19, 2020 and July 13, 2020, the researchers used online surveys to collect data from 10,923 U.S. residents and a sample of 51,986 individuals from 114 other countries. They found that conservatives in the United States engaged in less health-protective behaviors on average compared to their liberal counterparts and were less willing to be vaccinated.

The researchers also found evidence suggesting that perceptions about the risk of COVID-19 and the effectiveness of health-protective behaviors partially explained this relationship. Americans who were more conservative tended to report a lower likelihood of becoming infected and expected a COVID-19 infection to be less severe if they were to contract it. Conservative Americans also perceived health-protective behaviors such as social distancing and wearing a face covering as less useful.

“We suspect these effects were driven not just by political preference but by consumption of conservative media and endorsement of specific political leaders (e.g., President Trump) but our measures of political orientation did not capture this well,” vanDellen noted.

Previous longitudinal research has found that the use of conservative media is associated with increasing belief in COVID-19 conspiracies over time and reduced willingness to engage in health-protective behaviors. In addition, counties that voted for Donald Trump in the 2016 presidential election were found to have engaged in less social distancing compared to counties that voted for Hillary Clinton. Findings from another study suggested that Trump’s infrequent use of masks in public may have influenced his voters to follow in his footsteps.

The associations in the current study were statistically significant, but had relatively small effect sizes, meaning there was a large degree of overlap between conservatives and liberals.

“Although we did find that political orientation in the United States was associated with less mask wearing and lower vaccine intentions, there was a lot of variability,” vanDellen said. “There are plenty of people out there who are conservative who were wearing masks and have been vaccinated. People who might be hesitant to engage in these behaviors because they identify as conservative should know that many other people like them are getting vaccinated.”

The study, “Politicization of COVID-19 health-protective behaviors in the United States: Longitudinal and cross-national evidence“, was published October 20, 2021.