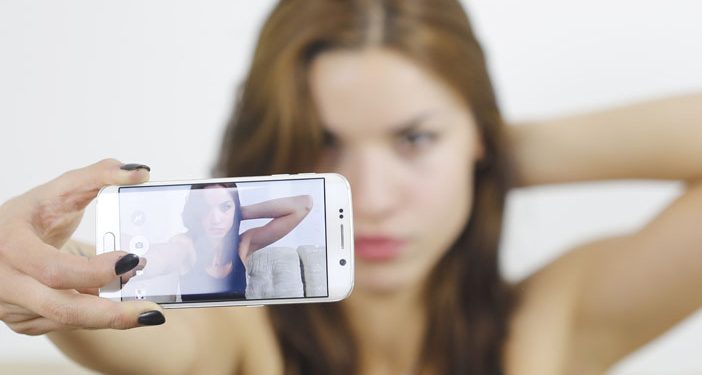 New research published in Addictive Behaviors Reports explores the link between body-objectification and selfie-posting behavior. The study found that body surveillance and positive expectations toward selfies predicted selfie-engagement among both men and women.

As study authors Valentina Boursier and her associates highlight, social media platforms are highly focused on visual content. This emphasis on physical appearance encourages self-promotion and attention-seeking. While much research has explored the problematic use of social media, the mental processes that classify certain social media behaviors as dysfunctional have yet to be identified.

“Social media use is an ubiquitous practice especially among adolescents and young adults. The scientific debate evidenced risks and opportunities in web-related behaviors and what makes the difference between a recreational activity (a positive engagement or a passion) and an uncontrolled behavior associated with negative consequences is still a matter of this debate, in which I’m particularly interested,” said Boursier, an assistant professor at the University of Naples Federico II in Italy.

“Many years ago I began to study this phenomenon exploring the expectancies which motivate selfie-sharing in boys/young men and girls/young women, highlighting the need to identify psychological processes underlining behaviors to define them as daily habits or dysfunctional patterns.”

The researchers set out to explore the popular social media behavior that is selfie-sharing. Since previous literature has linked selfie-posting to body-esteem issues, Boursier and her team wanted to consider the concept of self-objectification. This concept describes how an individual might internalize an external observer’s perspective and base their worth on how their appearance is judged by others. Researchers additionally considered how narcissism and expectancies towards selfies might influence selfie behavior.

A total of 570 Italian men and women (average age = 24) filled out an online questionnaire. The survey included a measure of selfie-engagement, assessed by asking subjects how often they shared selfies and how often they used selfies as profile pictures. They also completed the Selfie-Expectancies Scale (SES) which measured beliefs about the consequences of selfie-sharing, both positive (e.g., “How much selfie-taking improves your self-esteem?”) and negative (e.g., “How much selfie-taking might damage your reputation?”).

Regression models revealed two main predictors for selfie engagement. One was body surveillance, which describes a preoccupation with monitoring one’s physical experience. The second predictor was positive selfie-expectancies, suggesting that those who believe selfie-sharing leads to positive outcomes were more likely to engage in selfie behavior.

“Selfie-taking is a fun habit often responding to individuals’ need to share personal experiences. However, it might be potentially dysfunctional if used to increase self-confidence via others’ approval, controlling (and faking) body-appearance and personal identity through a higher engagement in social network use. Indeed, social media is the perfect environment in which people can present their best-self or hide their true-self.”

Furthermore, findings for both men and women revealed a relationship between narcissism scores and positive expectancies toward selfies, which included expectancies for self-presentation, self-confidence, and sexual desire. “In other words,” the authors illustrate, “men and women with vulnerable/grandiose narcissistic traits seem to share their body images through selfie-posting and expect an improvement in their self-confidence.”

As far as implications, Boursier and colleagues stress the need for a more comprehensive approach to body issues, given that body appearance is clearly implicated in the use of social media among young men and women. They suggest that future studies delve deeper into selfie-sharing as a means of self-promotion and consider the role of photo manipulation. The authors warn of the “dangerous opportunity of self-falsification” whereby individuals edit their personal images to meet the approval of others, causing “potential risks for males’ and females’ identity construction in young adulthood.”