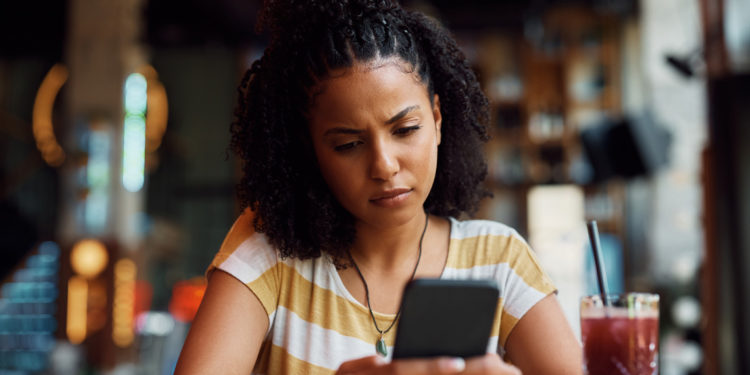 Safety concerns may motivate people to engage in ghosting, defined as suddenly ceasing all communication with a person you’re dating without any explanation, according to new research published in the Journal of Experimental Social Psychology. The findings suggest that one reason that ghosting occurs is to avoid a potentially violent response.

Ghosting has become a common phenomenon in the world of online dating, where it is generally frowned upon. Researchers have now begun to study the phenomenon in an effort to understand why people do it.

“My collaborators and I have been researching ghosting for the past few years, and our interest in safety concerns came from multiple places,” explained lead researcher Gili Freedman,an assistant professor of psychology at St. Mary’s College of Maryland.

“The interest in the topic actually began because we were curious about some patterns that we saw in anecdotes from the ‘real world.’ We saw a pattern in online forums where men would write about how they were frustrated that they were being ghosted, and women responded by saying that when they engaged in explicit rejection, men would respond in aggressive ways, so ghosting felt like the safer option.”

“We then noticed that when we asked participants to write about their experiences with engaging in ghosting, some of them expressed concerns about their safety,” Freedman explained. “As newer work on ghosting came out from other labs, we saw more evidence that safety concerns seem to be an important motivator of ghosting. Based on all of that, we wanted to understand how gender might be influencing the use of ghosting in the face of safety concerns.”

To examine the role of safety concerns in romantic rejection decisions, Freedman and her colleagues conducted two studies with 653 participants in total.

The participants were presented with a variety of dating scenarios and reasons to end a relationship. A motive for ending the relationship was randomly assigned to each scenario. For example, participants encountered the scenario “You’ve been on three dates with John/Jane and learn that he/she has been texting with his/her ex” and might be provided a motive such as “You want to end your relationship and want to find a way to do it as easily as possible.” The participants then indicated how they would end the relationship.

“The key takeaway is that people seem more motivated to engage in ghosting when safety concerns are made salient,” Freedman told PsyPost. “More specifically, our findings differed between our two studies. In the first study, we found that participants were more likely to ghost (compared to engage in explicit rejection) in response to safety concerns when the target of the rejection was a man. But in this study most participants identified as heterosexual so the gender of the target was confounded with the gender of the participant (e.g., if most of the women in the sample identified as heterosexual, they would only see vignettes about targets who were men).”

“In the second study, we recruited a sample of bisexual participants so that we could show each participant targets who were men and targets who were women. In this second study we found that gender of the target did not matter: participants were more likely to ghost when they were concerned about their safety regardless of the gender of the target. So taken together, it seems like safety concerns are an important motivator of ghosting, but the role of gender is less clear.”

“One major caveat is that because our findings differed from our first study (which had a mostly heterosexual sample) and our second study (which had a bisexual sample), we cannot be sure what the specific roles of sexual orientation are in decisions to ghost,” Freedman explained. “We also do not know if ghosting is an effective strategy in the face of safety concerns. Even though we showed that people may use ghosting in a protective way, it is not clear if ghosting actually reduces actual or perceived threat.”