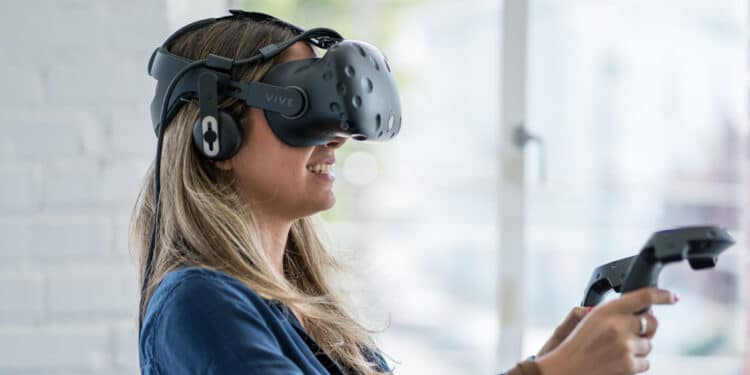 In an experiment published in the journal Appetite, a virtual reality training was found to reduce loss of control eating among participants with a history of binge eating.

Binge eating disorder (BED) is characterized by episodes of eating large amounts of food while experiencing a loss of control. While cognitive behavioral therapy is the most popular treatment for binge eating, evidence suggests that a substantial number of patients maintain their symptoms following treatment.

Researchers Stephanie M. Manasse and her team suggest that current treatments appear to be unsuccessful in targeting the loss of control associated with binge eating. The researchers suggest that this is because it is difficult to transfer treatment gains to real-world eating behavior. Manasse and her colleagues propose that an immersive virtual reality (VR) training centered around inhibitory control may be particularly powerful in changing patients’ behavior.

The researchers recruited 14 adults who reported experiencing loss of control eating at least once a week during the past three months. The subjects were an average age of 46. Over two weeks, the participants completed a daily VR inhibitory control training. The subjects completed the first session in the lab and 13 additional training sessions at home.

All items were presented on a plate and appeared to be sitting on a table, and subjects were given controllers that allowed them to “grab” the objects. Participants were instructed to grab “go” items and bring them towards their mouths as fast as they can but were instructed to refrain from responding to “no go” objects.

Importantly, subjects rated most aspects of the training favorably, with many indicating that it was easy to use and that they looked forward to their daily training. Participation was high, with subjects missing an average of only one training per week.

The findings were consistent with the robust evidence that Go/No Go paradigms reduce food intake in laboratory settings. “Although its specific mechanisms remain unclear,” Manasse and her team comment, “existing accounts theorize that GNG inhibitory control training paradigms create automatic “stop” associations with the target being trained (e.g., binge foods) rather than facilitating “top-down” inhibitory control, thereby targeting the “impulsive” rather than “reflective pathway of decision-making.”

The study was the first to show that a VR training that teaches inhibitory control can reduce loss of control eating behavior outside the lab. The findings suggest that such a training may be an effective addition to treatment for binge eating disorder. The authors suggest that future research should assess the effectiveness of a training period that is longer than two weeks, to assess the ideal dose of training.